THE GIANTS OF NORTHWEST PASSAGE WILDLIFE 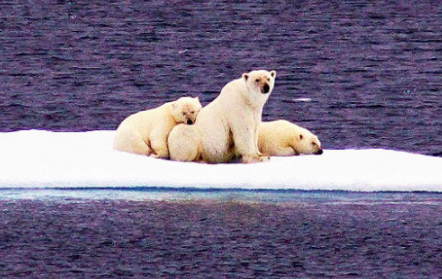 There are only 159 days until the embarkation of Crystal Serenity’s second Northwest Passage journey through the Arctic, and we’re more thrilled than ever before about the unforgettable adventures that lie ahead. The formerly unpassable region holds a wonder for travelers not found anywhere else in the world, and a significant piece of that spectacle is the wildlife that roams above and migrates beneath the ice.

Northwest Passage wildlife sightings are a highlight of every intrepid traveler’s quest for discovery in this icy realm. And while these encounters are not guaranteed– it turns out polar bears don’t check voyage itineraries when planning their lunchtime outings – the virtually untouched region is home to numerous species that freely populate the land and sea. Often, the size of the wildlife one encounters is directly proportionate to the amount of awe that strikes. Such is the case with the giants of the Northwest Passage.

Polar Bears – The ultimate combination of profound power and perceived furry cuddliness, these massive bears are the world’s largest, standing up to 10 feet high on hind legs. The polar bears in Canada’s Northern Territories account for more than 60 percent of the world’s population, making them among the animals most closely associated with the region. During Crystal’s Northwest Passage voyage, guests who spot female polar bears may also be treated to a double dose of the mighty animal’s cuddly side, as two thirds of polar bear litters are twins.

Narwhals – This unicorn of the sea is a marvel to many, as it contradicts itself in several ways. Its gigantic size (up to 17 feet in length and 2,100 lbs.!) belies its agility in the water and ability to dive deeper than almost any other marine mammal, while the foreboding “tusk” on its forehead is only occasionally used in aggression. The protruding spears are actually teeth, and can grow to more than 11 feet long in males.

Belugas, Bowheads, and Humpbacks – It doesn’t get much more giant than these enormously majestic creatures. Even within their own whale ranks, their size differentiation is significant. Among the most common Northwest Passage wildlife, whales have the ability to cause man to stand in awestruck silence at the sight of them. Rightfully so.

Belugas take the prize for smallest whales on our list, if you can consider 18 feet long and over 3,000 lbs. small in any context. Their silvery-white skin is a striking sight against the deep teal waters, enhanced by the fact that they travel in groups of up to 10, swimming in breathtaking unison.

Humpbacks are most associated with these chilly waters because they’re most likely to show up in dramatic photos of their breeching magnificence. They’re also gigantic – a prerequisite for this list – growing up to 66,000 lbs. and 42 feet in length, and boasting distinctive features that mirror its name, i.e. the hump behind their foreheads. And while their tubercle-covered jawline makes for a face only a mother could love, their grace and majesty in the sea is undeniably beautiful.

The bowhead whale is the surprising winner of our “biggest” Northwest Passage wildlife roundup, coming in just behind the blue whale as the second largest whale species on earth. Its baleen alone extend nearly 10 feet, which pales in comparison to its overall length of nearly 59 feet. Sometimes called the Arctic Whale, this giant feels right at home alongside Crystal Serenity in the Northwest Passage.

Crystal’s 2017 Northwest Passage sailing is open for booking now, with unforgettable experiences and regional experts set to enrich the journey for guests.

The post THE GIANTS OF NORTHWEST PASSAGE WILDLIFE appeared first on CRYSTAL INSIDER.