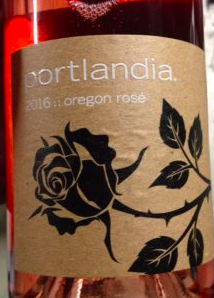 I don’t do a lot of these, but this Portlandia Rose Willamette Valley 2015 is one of my favorite’s of the style in quite some time.

To start, yup….Rose.  I end up doing this every 18 months or so, when I taste something I think is fun, but inevitably, someone complains.  If I count this pink as a red, people howl.  If I count it as a white, less people complain, but there’s always a note or two that comes back.

If receiving a Rose is a major issue, please let me know.

No, you won’t see another one for quite some time,

Ok, so here’s why I am counting this Portlandia Rose, as a white. To start, we should talk about how Rose gets made for a second.  In essence there are two methods to making Rose:

A quick word on Portlandia the winery.  I’ve written a bit about them in the past when I talked about their Momtazi Vineyard Pinot Noir, but there’s of course more to tell.

It’s often said, both in humor as well as in consternation, that it takes a large fortune to make a small one (or lose a small one depending on wider economic conditions) in the wine industry.

I originally met Damian Davis a couple of years ago.  He’s a guy, very tech skilled, interesting and insightful.  He’s also damn easy to deal with, which I appreciate.

Damian is one of those guys in the wine trade that’s willing to do two things.  First, he snuck in some of the wine he made that wasn’t suppose to be at the tasting.  Of the room of 150 wineries, I think he was the only one.  Secondly, he’s an energetic guy.  Like really energetic. Large scale wine tastings are nothing but groups of tables set up in ballrooms or convention centers.  If you’re pouring wine, it’s hard not to be checked out at times.  It’s hard not to tell people the same thing every 2 minutes over the course of three hours, then take the half gone wine home and call it a day.  When I met Damian I got the feeling that he would have been much, much happier walking about the room with a few bottles of wine, seeing which conversations he could join.  It seemed that the table wasn’t something that he was happy to hide behind like about 90% of the people pouring, but a confining thing that he would have been happier to remove. His nervous energy was endearing at an event, where too many end up simply going through the motions, or as retailers, only talking to the folks we already know.

It’s that energy that made me stop and taste through a range of wines that I didn’t have on my initial list and it’s that type of energy that makes his winery (really a group of separate labels) successful.  He tells the story of starting to sell wine out of the back of his car, that’s something I can appreciate….that’s the way I normally pick up wine, much to the humor of those working in the large scale warehouses that store wine around Napa Valley and Sonoma.

In any case, Rainier Wine (the larger name of the winery here) makes quite a bit of wine.  But, it’s spread out over many, many labels. For those outside of the Pacific Northwest, these wines simply aren’t available.

I’ve talked at length about how challenging it can be for wineries outside of California to gain attention on a national level, but Washington has some advantages.  Surely, some of that advantage comes from the fact that they can produce high quality Cabernet Sauvignon for about $10-$15 less than many in California based on land values.  But, there’s something else interesting and fun about seeing names before they end up everywhere right?

Where does that leave us?

What the critics say: 88 points Wine Enthusiast: Pale and refreshing, this is lightly scented by orange blossoms and strawberries, with similar flavors following. It’s a splendid sipping wine, with plenty of acid to buoy up the light fruit.

Sounds about right to me.  Plus, it’s officially spring! I hope my Explorations Wine Club members enjoy this one.

Why Do Some Wineries in Napa Valley Require Appointments?