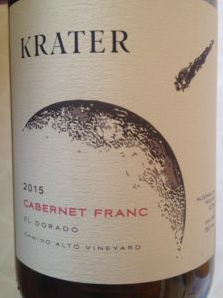 Cabernet Franc continues to be among my favorite varietals.  I’m guilty of sneaking more of this into wine club shipments than many other folks do, that’s for sure.  But, it’s also a grape that seems to beg for smaller wine projects than does it’s better known offspring.

Hi guys. Mark Aselstine with Uncorked Ventures. I’m going hold this up so you can see it, hopefully a little bit. So this is a Krater Cellars and this is definitely not one that you’ve seen before, so a couple things. So Krater Cellars is a two winemaker man team. Britt and David met in college, at St. John’s College, not the one in New York that you’re likely thinking of, but instead, one in New Mexico. They kept up a friendship and a relationship over the years, eventually both ending up in Sonoma to make wine. We had a chance to interview them for a different project yesterday, and I walked away pretty happy with not only the results, but seeing the kind of two-man winemaking team was interesting.

I always wonder when there’s two winemakers working on the same project, what if they’re at odds? And they said, “Basically they have the same philosophy in that, you know, if somebody feels really strongly about something, whoever feels more strongly about it, kind of wins.” So I think that’s a really healthy way for two folks, you know I had a business partner at the beginning of this and don’t any longer, so I can appreciate the ins and outs of having two people doing the same thing seemingly together, and trying to work through some of the issues that can come up. That was kind of fun.

So they make a Chenin Blanc and they make this Cabernet Franc, and so I think the Franc is interesting. First of all, if you’ve been a wine club member for any length of time you likely remember Franc actually is my favorite varietal, and it is grown in increasing amounts. It’s largely a blending grape here in California, but there are these newer wave of winemakers doing Franc in neutral oak with natural yeast, and the results I think are exemplary. You also end up with stuff like this is 12.7 alcohol, which in the state of California, is almost unheard of and it’s also even especially more unheard of when you find out that the grapes for this came from El Dorado County up in the Sierra foothills.

So this is, I think, another good example, I’ve talked about the benefits of altitude on vineyard growth in warm climates and there’s been some really good successes in Arizona and the state of New Mexico. People make sparkling wine there, people growing white wine grapes, people growing Syrah at high altitudes. The mountains, if you’re not familiar and you’ve never been in a true mountainous region, it gets darn cold at night, and so that’s a really important thing because it allows the grapes to recover their acidity. So this stuff is grown at almost 3,000 feet in elevation, which they described as being basically the end of the line. You can’t go up any higher and actually get fruit on the vine. While the Chileans might argue that point as they have pinot planted at 10,000 feel in elevation down in South America, this is really as high as we’ve attempted to go in the state of California, at least in the foothills so far.

So Krater Cellars is two-man team. You’re going to see a lot more content with them. I’ll talk about their Chenin Blanc, but this is an acidic wine, there’s probably more acidity than there is tannin. I think that’s a good thing. This does though, there’s a fuller mouth feel that exists for this than you would think with 12.7% alcohol. I do think that you can, there’s a certain feel that you get from natural yeast in wine, I don’t know why, that were not all of the bricks, all the sugar doesn’t convert to alcohol, but you still get some of the mouth feel with the higher levels. So I think that comes out here. You get some really nice blackberry and boysenberry notes.

It’s an interesting project. They did less than one ton of fruit. They both have day jobs at other wineries. One ton of fruit gives you about two barrels of wine, so you’re talking maybe 700 bottles total, so I felt lucky just to have one as a take home. So in any case, I’d love to do them in a wine of the month club and we’ll probably see a Chenin Blanc, because I think that will a little bit more of that than the Franc, but the Franc’s one of the really, truly best versions of the varietal that I’ve come across in some time and quite honestly, that’s saying something. Hope everybody’s having a good week so far, and I will talk to you soon.

Insider Insights: Five Steps for Planning the Perfect Trip to the Napa Valley