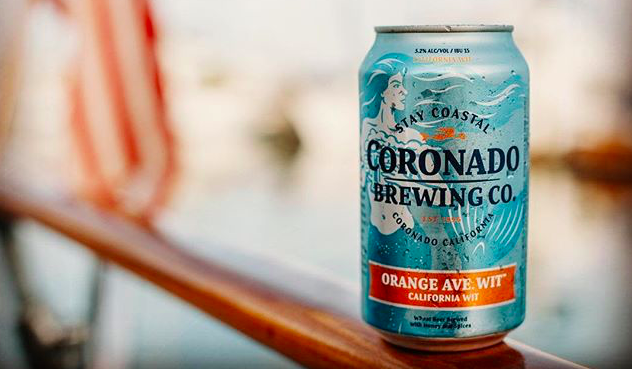 I was never a beer drinker. I always preferred a sparkly cocktail, or perhaps a glass of wine, but you truly cannot go to San Diego and not fall in love with craft beer. San Diego is considered the craft beer capital of the world, and let me assure you, there is something for everyone.

If you’re like (3-years-ago) me, and just dipping your toes into the pool of craft beer (metaphorical pool, though that would be awesome), there are options, and delicious ones at that. One of my favorite spots for first timers is Coronado Brewing Company. They opened their doors to the beach town of Coronado in 1996, and the coastal vibe of their brewpubs and tasting rooms holds true to their roots. The best location (in my humble opinion) is just up the road from the resort in Imperial Beach. The Orange Ave. Wit, named aptly for their namesake location on the island, is one of the greatest wheat beers I’ve ever had. With orange flavors and a very light finish, this beer fulfills all my dreams.

Another stellar pint is the Seacoast Pilsner, a super drinkable summer beer that lends itself well to the Coronado lifestyle. Coronado Brewing Company has something for everyone, and we always have at least one or two on tap at Loews Coronado Bay Resort.

Another great brewer is Mike Hess, whose brewery is located in the heart of San Diego (steps away from my house, which has proven to be a lesson in self-control). Must-tries from Mike Hess include the 8 West Orange Honey Wheat, the Grapefruit Solis India Pale Ale, and a pretty good rotating seasonal selection. I recently tried the award wining Claritas Kolsch, a german-style beer with some good hops. Their flavors are perfect for a San Diego afternoon. Grab a Hess out at the pool (check out their insanely cool cans!) and start your summer early.

My final choice for best brewing company is a slightly lesser known brand, Green Flash Brewing. They have a super cool tasting room here in San Diego, and are known for their impressive IPAs, but more than anything they have my favorite beer of all time: The Passion Fruit Kicker. This beer is so smooth and finishes with a tart, fruity flavor that quenches any thirst perfectly. If you find it on draft somewhere, order it. You won’t regret it. Another popular beer from Green Flash is the West Coast IPA, and they have recently rolled out a pretty cool line of Saisons, which is a pale ale that is highly carbonated and often spicy. Not for the beer newbie, but something worth checking out if you’re wanting to switch it up.

If you are in the North Park area, check out Toronado, one of the greatest tasting rooms in the country. It looks like a hole in the wall, but this place has one of the best selections of beers on draft of anywhere I’ve been (56 on rotation as I write). The list of craft beer spots basically never ends, and we haven’t even scratched the surface, but honestly, why are you even still reading this? Come to San Diego and drink some awesome beer!

Travel Solo and Save at Sunscape Resorts & Spas!