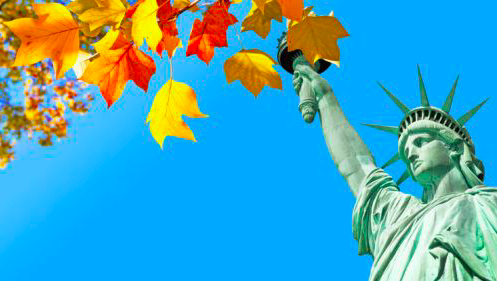 Memorial Day weekend is a natural time of reflection on patriotic sentiments that permeate the history of the United States. As the unofficial mark of summer’s beginning, it is also time for bar-b-ques, late nights that hold onto sunlight for hours, and occasions for pomp and circumstance. While the late-night summer sun does not last, the sense of national pride of Memorial Day endures, and has endured since the years following the Civil War, when the commemorative day began as Decoration Day. It is in this spirit that travelers, both, American and abroad, continue to explore sites throughout North America that have shaped its history.

Beautifully book-ending summertime as the seasonal complement to Memorial Day are four 2017 Crystal Serenity voyages that will allow you to do just that. Sailing along the northeastern coastline of New England and Canada in the main act of what is possible Mother Nature’s most spectacular display of color, the itineraries place you on the path of United States forefathers and game changers.

In very literal ways, you’ll walk the steps of those who created the United States, protected its freedoms and whose visions for the country still echo in the hallowed halls of monuments. As we kick off summer with reflection of what Memorial Day represents, let your curiosity embark to New England and Canada this fall, where the significance of the holiday comes to life with patriotic discoveries modern and historic.

Explore the battlefield at Gettysburg, guided by a specially licensed expert, where soldiers fought the largest battle ever on U.S. soil, with more than 180,000 casualties and considered the turning point of the Civil War

Walk the Freedom Trail in Boston, beginning at Boston Common, the United States’ oldest public park, and following the actual steps toward the American Revolution and passing through some of the country’s most impeccable examples of Colonial architecture and profound sites.

Learn the personal stories of the heroes of 9/11 at the New York memorial, personally guided by a survivor, rescue worker, volunteer or other veteran of the 2001 attacks.  Marvel at the survival tree that was pulled from the rubble and cascading 30-foot waterfalls where the Twin Towers stood.

Pay respects at Arlington National Cemetery, where thousands of soldiers from the Civil War to present rest, as well as presidents, the crew of the Space Shuttle Challenger and other notable Americans; and reflect at the National Mall, where World War II and the Korean and Vietnam War memorials are housed.

Visit President Washington at Mount Vernon, his Potomac Riverside home of more than 40 years, and final resting place. Visit the tombs of George and Martha Washington on the beautifully kept grounds, then venture to Old Town Alexandria, where Washington and Thomas Jefferson made their marks during America’s infancy.

Immerse yourself in the process, past and present, at the Capitol Building in Washington D.C., and also visit at the White House, Lincoln and Jefferson Memorials and Washington Monument

Explore Ellis Island and the Statue of Liberty, two of the country’s most significant symbols of freedom, with expert insights of the sites’ historical influence on our modern culture.

Crystal Serenity’s 2017 Canada and New England cruises begin September 16, with Crystal Symphony returning to the region beginning August 30, 2018. Book your autumn voyage through the splendors of the fall foliage and the prominent sites of American history today.

from CRYSTAL INSIDER http://ift.tt/2r5s9eh Visit Taylor & Co. Travel’s AllInclusive website at http://ift.tt/2ndHCGE for all your travel, wedding & accessory needs, and to book your Crystal Cruises Xperience or Destination Wedding!!!

What Is San Vino?

LEGO For Fun! – All You Need To Know About LEGOLAND Dubai