Pearl Harbor Ship Breathing Life Back Into the Waters of BVI 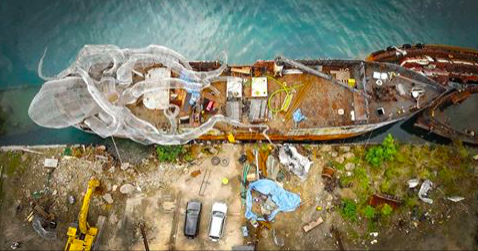 A former Navy fuel barge- one of the 5 remaining boats that survived the attack on Pearl Harbor will have a new home – the bottom of Caribbean Sea in the British Virgin Islands. This aging vessel will serve as an underwater art installation and dive site to ultimately help rebuild the diminished marine life.

On December 7, 1941, the Navy fuel barge YO-44, holding 10,000 gallons of aviation fuel floated in Pearl Harbor while tied to a submarine. As bombs began to rain from the sky, the vessel and crew stealthily avoided the enemy fire and successfully prevented a lethal explosion of the barge and everything that surrounded it.  The ship was renamed the Kodiak Queen and lived the remainder of its life as a fishing boat. After a historian noticed the ship, he created a website to prevent the historic ship from being turned into scrap metal- and it worked.

Sir Richard Branson; Unite B.V.I., Secret Samurai Productions, Maverick1000, Beneath the Waves have all joined hands to collaborate on Project YOKO B.V.I Art Reef. This April, the ship will be sunk off the coast of Virgin Gorda, just miles away from Scrub Island Resort, Spa & Marina. The ship isn’t going down alone, a giant kraken with 80-foot tentacles will be attached to the ship. This art piece is made out of rebar and mesh and will serve as marine life rehabilitation habitats. The boat will be given a new life and in return give new life to the Caribbean and is a symbol for regrowth.

This eclectic dive site will use the boat and kraken as a dive site, artificial reef and science lab. Within two months of sinking the ship, divers will be able to explore the nooks and crannies of this underwater art installation. Project YOKO will serve as an educational program to encourage the children of the B.V.I to learn how to swim. Very few children know how to swim and view the ocean as only a source of food. This art installation will promote an interest in marine life and help build relationships with the environment.

Sir Richard Branson has said, “This Project provides an exciting opportunity to capture people’s attention and then to refocus it on important issues facing our oceans — for example, the importance of addressing global warming to protect our coral reefs and the need to rehabilitate vulnerable marine species such as severely overfished grouper populations.”

Getting to Scrub Island Resort, Spa & Marina Just Got Easier (and Faster!)