How To Take Yourself Out to ALL the Ballgames! 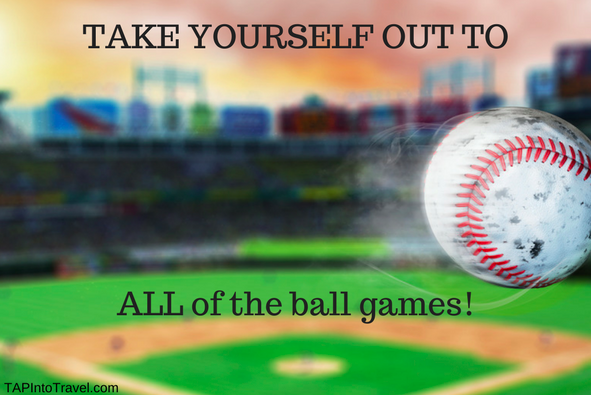 Whether you’ve been a fan of baseball from the last time the Chicago Cubs won the World Series up until they finally won it again last year, or whether you’re always going to root for the underdog, the love of the game stays with you all your life. To some, the most beautiful sound in the world is the music made when a baseball solidly meets a wooden bat. The smell of the grass, and the taste of hot dogs and crackerjacks have become almost synonymous with the game spanning more than a century and a half. It’s no wonder that baseball has been America’s Pastime almost as long as the game itself has been around.

For Love of the Game

The first trip to a major league ballpark, each one with distinctive character found nowhere else in professional sports, is a memory not easily forgotten. Whether it’s Dodger Stadium, nestled in the picturesque Chavez Ravine, or the Green Monster in Fenway Park’s left field, there is a sense of uniqueness to each stadium. Catching a home run or foul ball is not something you’ll be able to do anywhere else. Try keeping a ball after a game winning touchdown or slam dunk – it’s not going to happen. Want an autograph or a picture with your favorite player? Show up an hour early and you’ve got a pretty good chance to get one.

It’s not all about the Major Leagues either. From the little league teams to the farm leagues, college games and beyond, baseball fever is still hot, hot, hot. And you can get in on the action! Did you know that TAP offers baseball travel? Be sure to check out our 2017 Baseball Travel Guide for all the details!

And America isn’t the only place to see the action. Many rising stars are coming from the Caribbean, Mexico, South America, Japan, and Korea. Baseball has never been as popular in Europe, Africa, and Australia than it is right now. The fortress that is the Tokyo Dome is home to the Yomimuri Giants, the baseball team that featured Sadaharu Oh, the Taiwanese phenom who hit 106 home runs more than any MLB player. The sounds and smells of the game are everywhere.

From Lou Gehrig to Ken Griffey Jr, and Roberto Clemente to Ichiro Suzuki, the game has always been played by unforgettable stars, who changed the world with their actions on the field. Earlier this year, President Barack Obama credited Jackie Robinson’s contributions to the game as part of changing America’s heart, linking himself to becoming president.

If baseball is able to do something as complex as define a nation to its core, then the feats that its simplicity can accomplish are innumerable. If you have missed out on the endless joys of baseball, then do yourself a favor and visit your local team’s ballpark and catch a game. Even if they are only little leaguers, the game you see won’t be without its incomparable charms and joys.

We definitely recommend you check out our 2017 Baseball Travel Guide, to get a feeling for the variety of options we offer, but here are some of our top hits. You might say, they hit it out of the park.

See the induction ceremony up close and personal as Jeff Bagwell, Tim Raines , Ivan Rodriguez, John Schuerholz, and Bud Selig are inducted into the Hall of Fame forever! Plus you’ll be able to catch some of your favorite teams in a baseball road trip that you’ll never forget.

Baseball plus cruising? Did you hear us right? Yep, you sure did! Following a fabulous cruise aboard the Norwegian Epic, enjoy 2 nights in Florida where you’ll catch the hottest up-and-comers as well as today’s greats at the spring training extravaganza.

Prefer to catch some different games? Check out these great Baseball Road Trip itineraries for 2017!