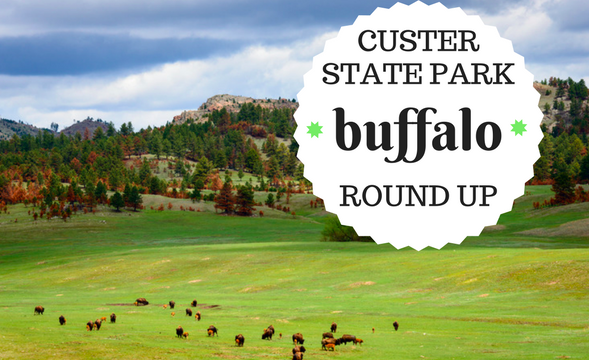 It’s the Custer State Park Buffalo Roundup, an Old West Tradition, Light breaks on the horizon and reveals a landscape already alive with excitement. Horses, lassoes, and cowboy hats, the wranglers ready their mounts and secure their gear. It’s a chilly September morning, and steam rises in the air with their banter, as coffee cups are emptied and the cowboys get ready to ride.

Beating hearts and hooves startle the morning to life, to the delight of the crowd gathered on the ridge lines. The rolling gold hills below ripple with the shaggy backs of bison and dust clouds rise as the beasts stream like fishes through a sea of autumn grass. They surge and swerve and send dirt clods flying. Their hooves dig deep as the wranglers flank their mass. With skillful finesse, the herd is merged and mastered, and the wave of buffalo stream through the narrow corral gate.

For the 10,000 or more spectators who have come from far and wide to witness this historic event, the fun of the annual Custer State Park Buffalo Roundup has only just begun. Charged with excitement and a belly full of pancakes, it’s time to take in some entertainment and peruse the goods of 100-plus vendors  who are attending this three-day event.

Custer State Park received its first herd of 36 buffalo in 1914, but it wasn’t until 1965 that the roundup became an annual event. Though the roundup still functions as a means to monitor the health of the herd, over the years, it has grown in popularity as a recreational venue. Witnessing an authentic roundup of 1,300 buffalo in true cowboy tradition is to experience preservation in action, not only of the buffalo but of the Old West way of life.

Custer State Park Buffalo Roundup – Feel the thunder of pre-historic beasts as they rumble by during this fall tradition in the beautiful Black Hills of South Dakota. Ever since park rangers started rounding up some 1,200 head of buffalo each fall for the annual branding, sorting and vaccinating, visitors have been fascinated by this Old West tradition. Thrill to the wonder of these pre-historic beasts rumbling by a designated – and safe – viewing area to the corrals.

from TAP into Travel Blog http://ift.tt/2mkFdYY

Things To Do Next Week