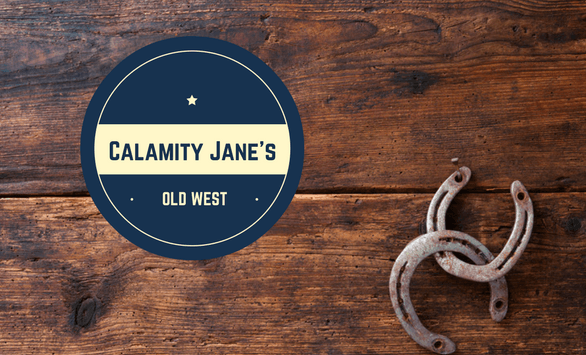 Some of the most retold stories in our history are the adventurous Tales of the Old West. Most of the time, these stories are about the famous men who lived and contributed to our country. However, many tales of interesting women also exist. Calamity Jane was one of those women.

In 1852, Martha Jane Cannary entered the world, born to a father with a gambling problem and a mother of ill repute. In her youth, she was often described as a pretty, dark-eyed girl. She loved the outdoors and riding horses. Unfortunately, Martha Jane had to grow up fast. By the time she was twelve, both of her parents had died, so she began moving from place to place, as she tried to survive. Little did anyone know how much she would accomplish in her life!

After relocating to Wyoming, she worked various jobs to support herself and her five siblings. Then in 1870, she started working as a scout for General Custer. She reportedly got her name of Calamity Jane from a Captain in the U.S. Army, after she rescued him during an Indian uprising in 1873. Soon after, she met Wild Bill Hickok, headed to South Dakota, and ended up in the town of Deadwood. While there, she worked as a Pony Express rider, delivering mail over the roughest trails in the Black Hills.

Despite being a daredevil, she was known for her compassion toward others. Many stories exist about her softer side, including her rescuing a runaway stagecoach and helping those infected with smallpox during an epidemic. Calamity Jane‘s real fame took hold, though, after she joined Buffalo Bill’s Wild West Show in 1895. Her excellent shooting and riding skills entertained audiences for years.

Because of her hard life, she unfortunately suffered ill-health and died in 1903. She was ultimately buried next to Wild Bill Hickok, who had passed away from a gunshot wound years before. Her funeral, at the time, was the largest ever in Deadwood for a woman, which was a true tribute to her popularity.

This is just one account about the past and the people who lived in the intriguing and beautiful Dakota Territory. Historic sites still exist in North and South Dakota. Visitors and residents alike can experience a part of this past and thus help to keep the Tales of the Old West alive for many years to come.

Recommended Tours to Experience the World of Calamity Jane

Total Solar Eclipse with Mt. Rushmore & Yellowstone – Check three bucket-list items off your list as you experience a once in a lifetime celestial event while traveling through the Black Hills and Yellowstone! In August of 2017 a total eclipse of the Sun will be visible from within a narrow corridor across the Western United States.  Experience this rare event during a scenic 8 day journey through the Black Hills and Yellowstone National Park.

Custer State Park Buffalo RoundUp – Feel the thunder of pre-historic beasts as they rumble by during this fall tradition in the beautiful Black Hills of South Dakota. Ever since park rangers started rounding up some 1,200 head of buffalo each fall for the annual branding, sorting and vaccinating, visitors have been fascinated by this Old West tradition. Thrill to the wonder of these pre-historic beasts rumbling by a designated – and safe – viewing area to the corrals.

Old West Trail – The romance of the Old West comes alive on this 7 day adventure featuring Historic Deadwood, the Little Big Horn Battlefield, Mount Rushmore, Fort Laramie and other Oregon Trail sites. Explore the West where legends live.  Visit the site of “Custer’s Last Stand”, stroll the same storied streets of Deadwood Gulch once inhabited by Calamity Jane, Wild Bill Hickock and Poker Alice, view awe-inspiring mountain carvings, and walk in actual Oregon Trail wagon ruts which have survived more than a century of sun, wind and weather. This is your opportunity to kick up your heels and recall the “bad old days” of the Great American West! (custom travel opportunity for preformed groups.)

from TAP into Travel Blog http://ift.tt/2mNZn0A Visit Taylor & Co. Travel’s AllInclusive website at http://ift.tt/2ndHCGE for all your travel, wedding & accessory needs, and to book your Guided Xperience or Destination Wedding!!!

Just A Splash of Color!!

Treat Yourself to Relaxation at Sunscape Resorts & Spas!