The Brando – The Man-The Resort 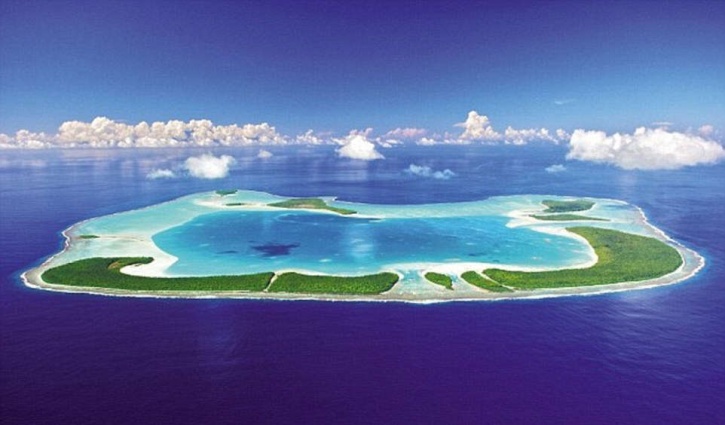 When you hear the word Brando, I’m sure the first thing that comes to mind is none other than Marlon Brando, as it should.  One of the most influential actors of all time, he is remembered for his amazing Academy Award winning performances as Terry Malloy & Vito Corleone and his impactful roles in A Streetcar Named Desire, Julius Caesar, Last Tango In Paris, and Apocalypse Now.  While acting was a big part 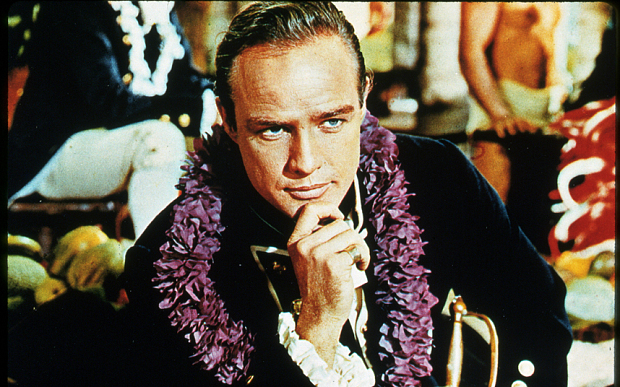 of Brando’s life, it wasn’t his only passion.  He was an activist for many causes throughout his life time.  Lucky enough to have read his autobiography, “Songs My Brother Taught Me”, I find his interestingly candid statement  about how he met Marilyn Monroe and continued an on again intermittent relationship with her for years as well as claiming to have received a phone call from her just days before her tragic death intriguing, but nothing intrigued me more than reading about his connections with Tahiti.

Tahiti became an important part of Brando’s life in 1962 with his starring role in “Mutiny On The Bounty”.  His love interest in the movie, Tahitian actress, Tarita Teriipaia, would become his third wife.  Her influence led him to become fluent in French and they eventually had two children together whose lives were filled with many tragedies beginning with 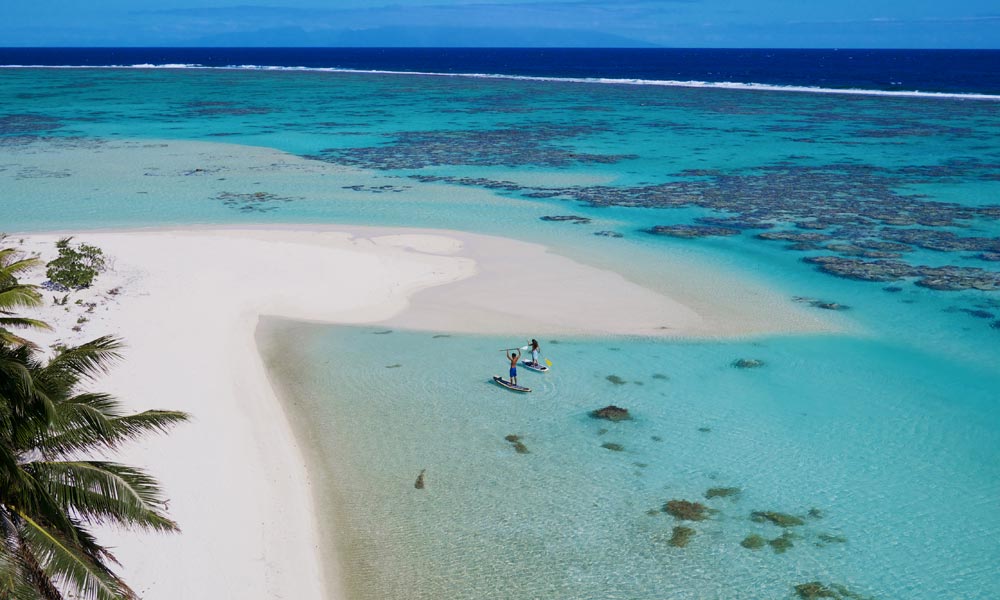 their parents divorce in July 1972, murder in 1990, and suicide in 1995.  While Brando’s marriage to Tahitian actress only lasted ten years, the effect the Tahitian natives and culture had on him would last a lifetime and profoundly change his life.  Having recently visited Tahiti I can see how Brando was so enamored with the natural surroundings of such a beautiful, serene place that looked too perfect to be anything but a screensaver, because I too was moved in many ways by this gorgeous land and have been inspired to learn French and visiting Tahiti as much as possible to learn about every inch of this amazingly inspiring destination.

Wanting to get away from the enigmatic craziness of the Hollywood chaos, Brando would sneak away and relish in his time on an island known as Tetiaroa which was visited only by the wealthy.  His love for this magical place lead him down an almost 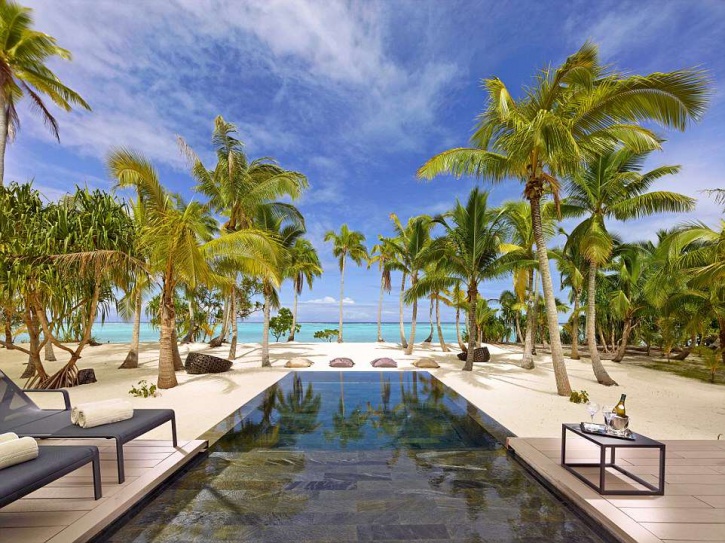 6 year path of negotiations, but Brando was eventually granted the approval to purchase the 12-island atoll for $1.5 million.  Not only an activist, Brando was also an environmentalist and not until 1970, when he could financially create a responsible luxury, preserving Tetiaroa’s biodiversity, did he hire an architect to build his home and natural village.  Keeping the life of the land in the forefront, this luxurious creation consisted of an environmental laboratory, sea water air conditioning, solar energy, and a biofuel thermal power plant with echo stations to use for educational & research purposes protecting the sea birds and turtles which would also go on to welcome a plethora of student groups for many, many years.

Tragically, in 1983 the hurricane destroyed many of the structures including his resort.  After mother nature struck, Brando decided to turn the island into the world’s first post-carbon 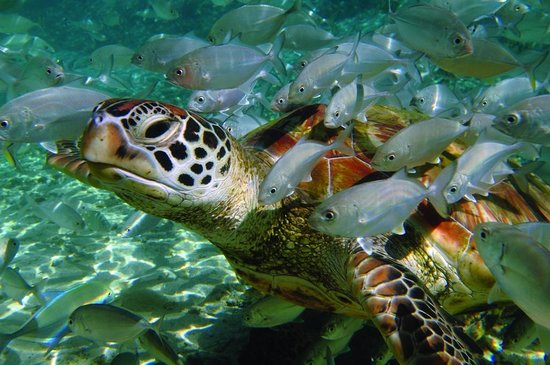 resort composed on a dozen small islands surrounding a sparkling lagoon 30 miles northeast of Tahiti and is known today as none other than………….The Brando. 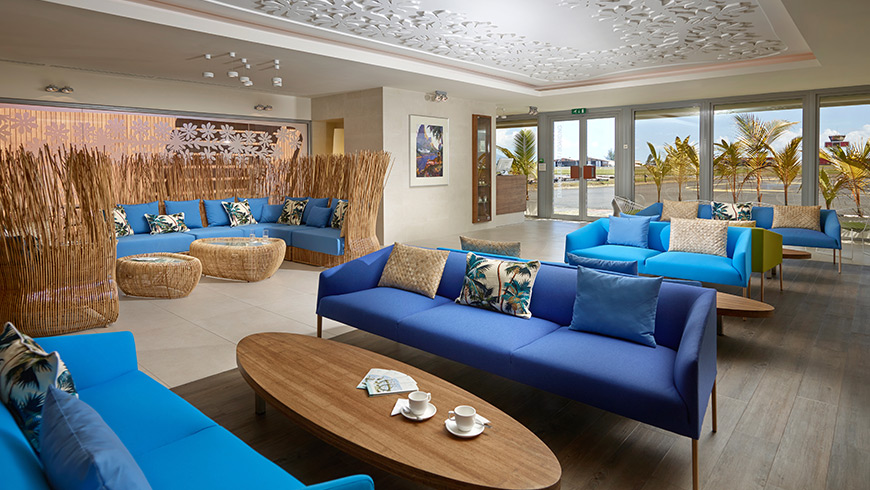 private terminal for your 20-minute flight to paradise. Although the flight is brief, it will provide you an unforgettable introduction to Tetiaroa and show you a glimpse of what is yet to follow on a most memorable xperience at The Brando. 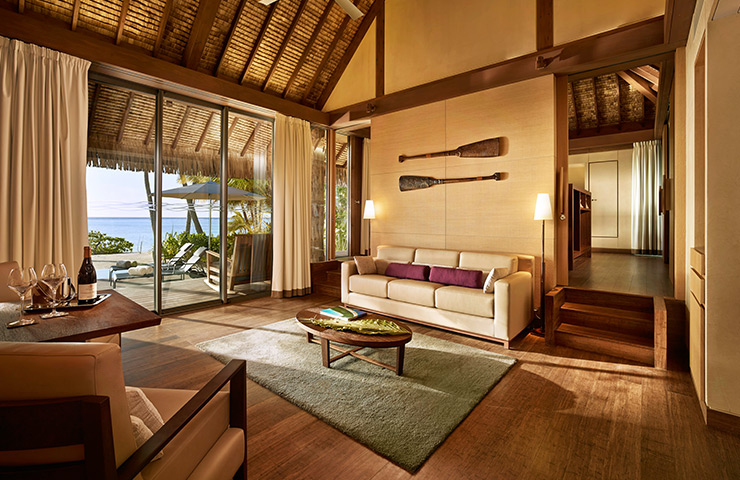 Graciously designed to blend into its natural surroundings, the villas provide indoor/outdoor living that is unrivaled by any other resort.  Travel solo and enjoy a spacious one bedroom villa or travel with a small group of your closest couples and enjoy the luxurious three bedroom villa.  All include private outdoor living areas with pools as lavish as their interiors.

Staying true to the Polynesian culture, The Varua Polynesian Spa is a unique haven of tranquillity nestled on a restful pond in the heart of the atoll of 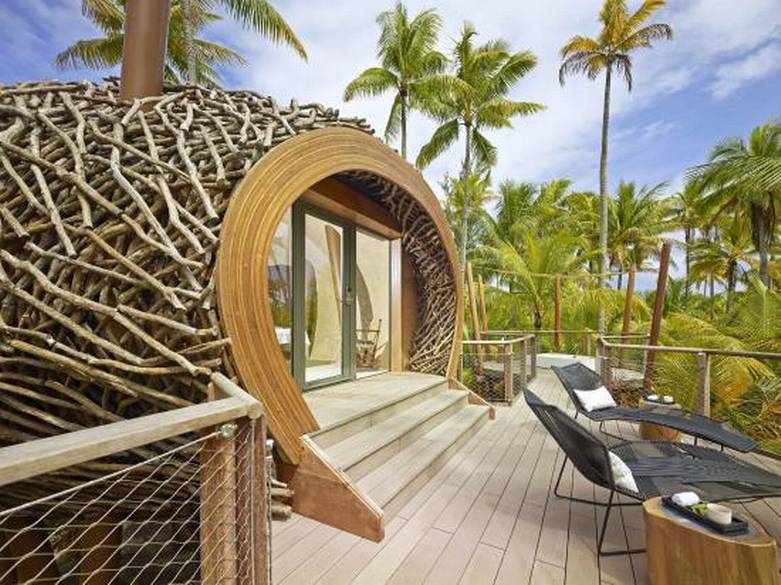 Tetiaroa. Varua, meaning “the Soul”, perpetuates the tradition established by the Royal family who used to retreat here to relax and indulge in beauty rituals.  Blending into the lush vegetation, it is a hidden oasis at the end of a path through the tropical undergrowth. The Spa is in harmony with its surroundings of plant life, water and wood. Aware of the need to preserve its pure and unspoilt habitat, it offers unrivalled holistic treatments inspired by international and ancestral Polynesian techniques in a truly exceptional setting. The Spa suites offer amazing views over 2000 sqm of natural landscape on an islet covered in abundant vegetation. And high above in the trees sits Fare Manu, an exceptional suite nesting like a cocoon between heaven and earth. The Spa also has quiet spaces for relaxation including a steam bath, a waterfall, a tea lounge and the Fare Mana, an area sets aside for gentle energies. 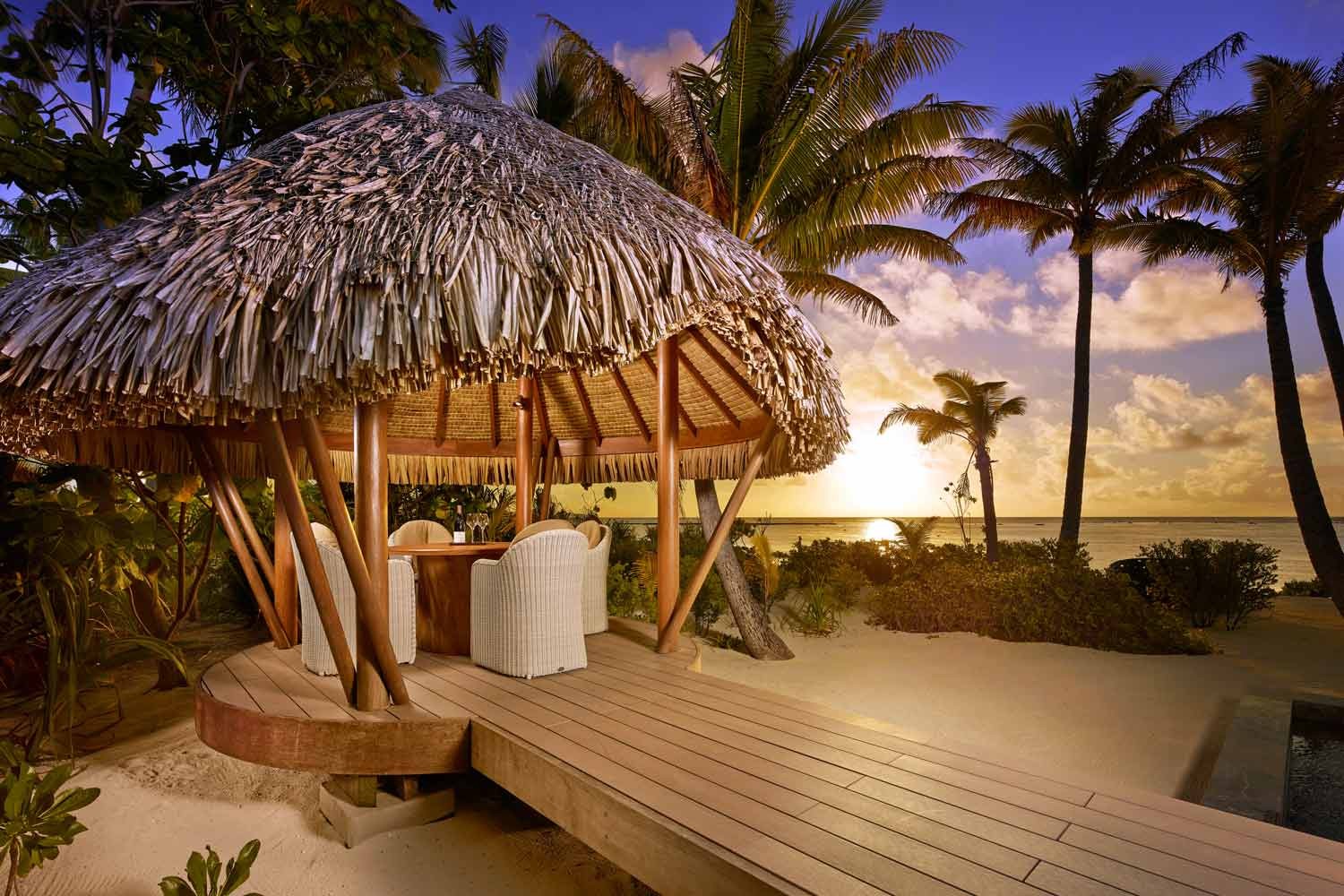 cuisine.  Indulge at the Beachcomber Cafe – which offers exceptional lagoon and ocean views.  Les Mutines – This intimate venue features elegant décor in beautiful tones of tropical light and sand and a moat that surrounds the restaurant provides the sensation of floating on a lagoon. The restaurant also includes a world-class wine cellar in a carefully climate-controlled glass enclosure. Te Manu Bar – Located on the second floor, this open-air bar features spectacular views of the lagoon, 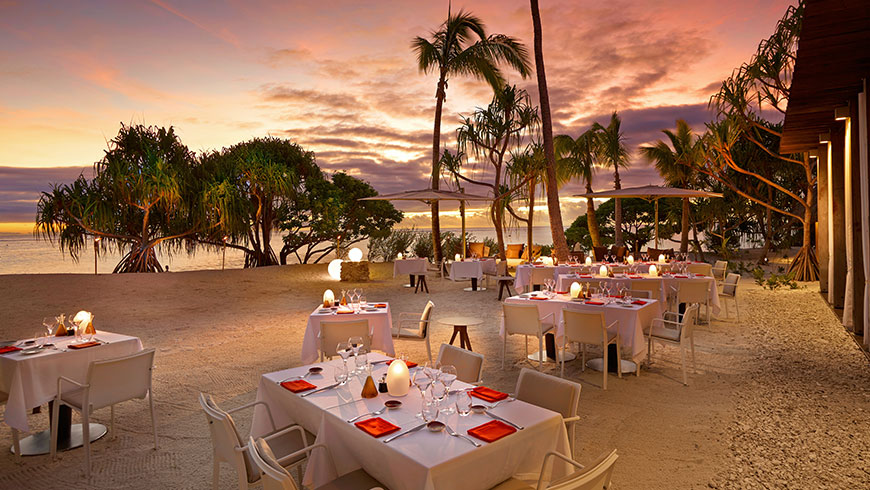 distant motus and sunsets.  Bob’s Bar – This is a relaxed and casual setting on the beach for conversation and making friends. The bar is named for Marlon Brando’s factotum on film sets, and we can’t forget Room Service – You can enjoy a meal whenever you want, 24 hours a day, at your villa—either indoors, on your private deck alongside your pool, or on the beach in front of your villa.  You will feel pampered beyond your wildest imagination, your soul will be revitalized, and your energy restored by the tranquil aura of this most magnificent place.

The Brando is a place to not only live as one with nature it also offers serene activities such as snorkeling in the coral gardens and the entire lagoon, kayak exploration of the lagoon, Polynesian outrigger canoe (va’a) or  stand up paddle board, scuba lessons in the lagoon, and open ocean 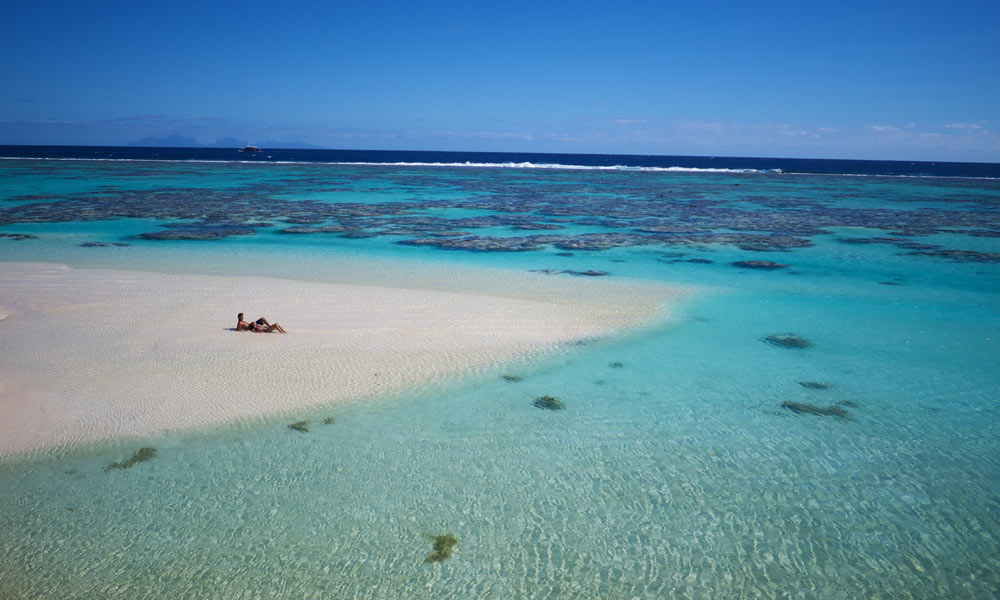 scuba diving outside the reef, tennis, biking, and deep-sea fishing.  While all of these seem like pretty common activities at resorts throughout French Polynesia, The Brando sets itself apart by offering Biologist of the Day Excursions with Naturalist Guides consisting of a bird discovery tour, reef quest, and exploration of Motu Onetahi on a naturalist trail.  The Tetiaroa Ultimate Tour boasting a unique tour of the atoll on a comfortable roofed boat with a naturalist guide, and how many resorts can boast about their Research Station and guided tour with a researcher.

The cultural xperiences don’t stop there relish in the art & culture of all that is French Polynesia with Polynesian dance lessons, Polynesian music lessons with ukulele, pahu or toere, Polynesian handicraft lessons, Pareu dyeing and tying,

Cuisine, wine and cocktail lessons, and Tahitian cuisine demonstrations.  You will truly feel inspired and as one with the culture of the island after experiencing these authentic artistic offerings.

Already in a league of its own, The Brando elevates itself even higher by offering an unprecedented library and explorer center where you can read books about French Polynesia and attend lectures and demonstrations about Polynesian culture, history, and lifestyle. The onsite research scientists will also be delighted to talk about their research and the amazing birds and marine life found on the atoll.

While the pictures are amazingly gorgeous in their own rite, The Brando is as iconicly different as its namesake and offers an experience unprecedented by any other resort around the world.  Join me next year for a life changing xperience, cruise on the majestic Aranui5 to the Marquesas Islands, stay in breathtaking Bora Bora, and xperience unforgettable nature at The Brando.  #XperienceTravel #TheTaylorWay with Taylor & Co. Travel.  Email Sales@TaylorAndCoTravel.com for additional information about The Tahiti Xperience.

Yes You Can Be Queen of the Castle

Are You In The Mood Yet?

Tahiti in general is a magical place and each island has its own personality. The Brando, I feel is Marlon Brando’s most noteworthy accomplishment and shows the real human side of an actor whose life was not always as fabulous as it appeared on the outside.